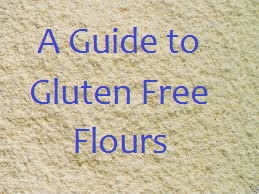 When first going gluten free, or if you’re not gluten free but you want to bake gluten free items, the amount of flour varieties can be quite overwhelming. If you search online, you’ll find all sorts all-purpose mix recipes combining some sort of rice flour, a couple of starches, and sometimes sorghum too. The more daring ones will sometimes have chickpea flour, which to me seems weird. Oh and let’s not forget the gums. Let’s face it though. Even an all-purpose mix can be limiting.

When I first discovered my gluten intolerance, about two years ago, I lived in an apartment with no oven. I did manage to bake some cupcakes in my toaster oven, 6 at a time. It’s important to keep in mind that your gluten free batters should be less runny than their gluten-containing equivalents. Have I ever mentioned that my first two batches of cupcakes came out like pudding?

In this post, I’ll talk about the different kinds of flour I like to use. Some are more important than others. Some I only use for bread, and I realise that not everyone has the patience to make bread.

Rice Flour – Your basic gluten free flour. To be used in combination with other flours/starches, unless you just need a tablespoon or two to thicken a sauce. This is pretty much a must have in your pantry. I find that it has the most neutral taste out of all the gluten free flours. White rice flour isn’t very different from brown rice in flavour, but the nutrients have been stripped, so I would recommend avoiding it if you can. Look up all purpose gluten free flour mixes to know in which proportions to use for your typical stuff.

Sorghum Flour – Comparable to brown rice flour in taste, though I would say it’s a tad stronger. Its texture is usually a bit grainier, and it’s a bit of a heavier flour than brown rice flour. When in a pinch, unless you’re making something very delicate, you can often use sorghum flour instead of brown rice flour. I like it in breads.

Potato Starch and Tapioca Starch – These starches are usually used in all-purpose flour mixes. They help lighten the mix. Use a combination of the two for best results.  You may want to tread lightly when using one of these starches in a recipe that calls for cornstarch because the texture may be off a little.

Arrowroot Powder – This is my favourite starch. It’s a bit pricier than other starches, but it’s virtually tasteless. I like to use this in custard and gravy because it will thicken things nicely, unlike, say, tapioca starch, which might give your sauces a weird gummy texture.

Almond Meal/Flour – Almond meal, which is coarser than almond flour, is great as a substitute to bread crumbs. It can also be used in baked goods where a fine flour isn’t needed. I wouldn’t use it in cupcakes, but it’s great for brownies or breakfast muffins. Almond flour, on the other hand, makes great cookies and pancakes. A bonus: it has a low glycemic index.

Teff Flour – A dark flour with a nice, nutty flavour. Good for breads. It’s a bit finer than other flours. This is the flour used in Ethiopian ingera. It can also be used in pancakes.

Buckwheat Flour – Perfect for pancakes (try these banana buckwheat pancakes), but also good in all sorts of different goods. Keep in mind that it has a bit of a stronger flavour. No gum required.

Chickpea Flour – Has a distinct flavour. I only use it for middle eastern and Indian meals (try this pudla recipe). Some sweet recipes call for it, but I can’t seem to enjoy it in sweet recipes. I don’t even like it in breads as part of a blend of flours because of its strong taste.

Millet Flour – An inexpensive flour that can be used in flour blends for a nutty flavour. It’s similar to brown rice flour in chemical properties but tastes stronger.

Xanthan Gum and Guar Gum – These are often necessary in gluten free baked goods to act like the gluten – it’s the glue that keeps everything together. Xanthan gum is derived from corn so it can be problematic for people with corn sensitivities.

Chia meal – I’ve been experimenting with replacing gums with chia meal, which is just ground chia seeds. It takes a LOT more chia meal than gum to achieve the same effect (about 6 times as much, from what I’ve noticed so far). The idea is to add water to it to activate its gelatinous texture. It also makes a good egg replacer. Combine 1tbsp chia meal with 3 tbsp water for each egg in a recipe. Let sit 5-10 minutes before adding it to the mix. You can also use ground flax meal in the same proportions, for an egg substitute.

If your approach to health is more DIY, the free online community may be a better fit: